Here’s what happened in January to the code, data, and tools that support MDN Web Docs:

Here’s the plan for February:

Thanks to Daniel D. Beck and his 83 Pull Requests, the CSS compatibility data is migrated to the browser-compat-data repository. This finishes Daniel’s current contract, and we hope to get his help again soon.

The newly announced MDN Product Advisory Board supports the Browser Compatibility Data project, and members are working to migrate more data. In January, we saw an increase in contributions, many from first-time contributors. The migration work jumped from 39% to 43% complete in January. See the contribution guide to learn how to help.

On January 23, we turned on the new browser compatability tables for all users. The new presentation provides a good overview of feature support across desktop and mobile browsers, as well as JavaScript run-time environments like Node.js, while still letting implementors dive into the details.

Florian Scholz promoted the project with a blog post, and highlighted the compat-report addon by Eduardo Bouças that uses the data to highlight compatibility issues in a developer tools tab. Florian also gave a talk about the project on February 3 at FOSDEM 18. We’re excited to tell people about this new resource, and see what people will do with this data. 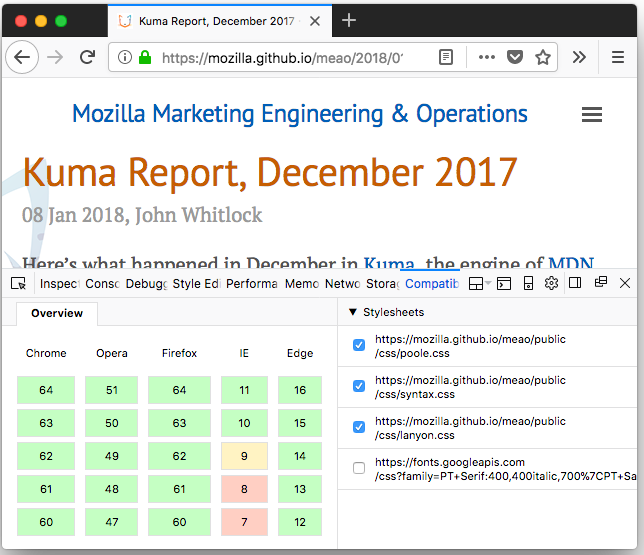 If you use the language switcher on MDN, you’ll now be asked if you want to always view the site in that language. This was added by Safwan Rahman in PR 4321.

This is useful for MDN visitors who like to browse the web in their native language, but read MDN in English, but it doesn’t fix the issue entirely. If a search engine thinks you prefer German, for instance, it will pick the German translations of MDN pages, and send you to https://developer.mozilla.org/de/docs/Web/HTML. MDN respects the link and shows the German page, and the new language preference is not used.

We hope this makes MDN a little easier to use, but more will be needed to satisfy those who get the “wrong” page. I’m not convinced there is a solution that will work for everyone. I’ve suggested a web extension in bug 1432826, to allow configurable redirects, but it is unclear if this is the right solution. We’ll keep thinking about translations, and adjusting to visitors’ preferences.

MDN easily serves millions of visitors a month, but struggles under some traffic patterns, such as a single visitor requesting every page on the site. We continue to make MDN more reliable despite these traffic spikes, using several different strategies.

The most direct method is to limit the number of requests. We’ve updated our rate limiting to return the HTTP 429 “Too Many Requests” code (PR 4614), to more clearly communicate when a client hits these limits. Dave Parfitt automated bans for users making thousands of requests a minute, which is much more than legitimate scrapers.

Safwan Rahman took a close look at the database usage for wiki pages, and made several changes to reduce both the number of queries and the size of the data transmitted from the database (PR 4630). This last change has significantly reduced the network traffic to the database.

All of these add up to a 10% to 15% improvement in server response time from December’s performance.

Ryan Johnson continued work on the long-term solution, to serve MDN content from a CDN. This requires getting our caching headers just right (PR 4638). We hope to start shipping this in February. At that point, a high-traffic user may still slow down the servers, but most people will quickly get their content from the CDN instead.

There were 326 PRs merged in January:

67 of these were from first-time contributors:

In February, we’ll continue working on our January projects. Our plans include:

See the December report for more information on these projects.